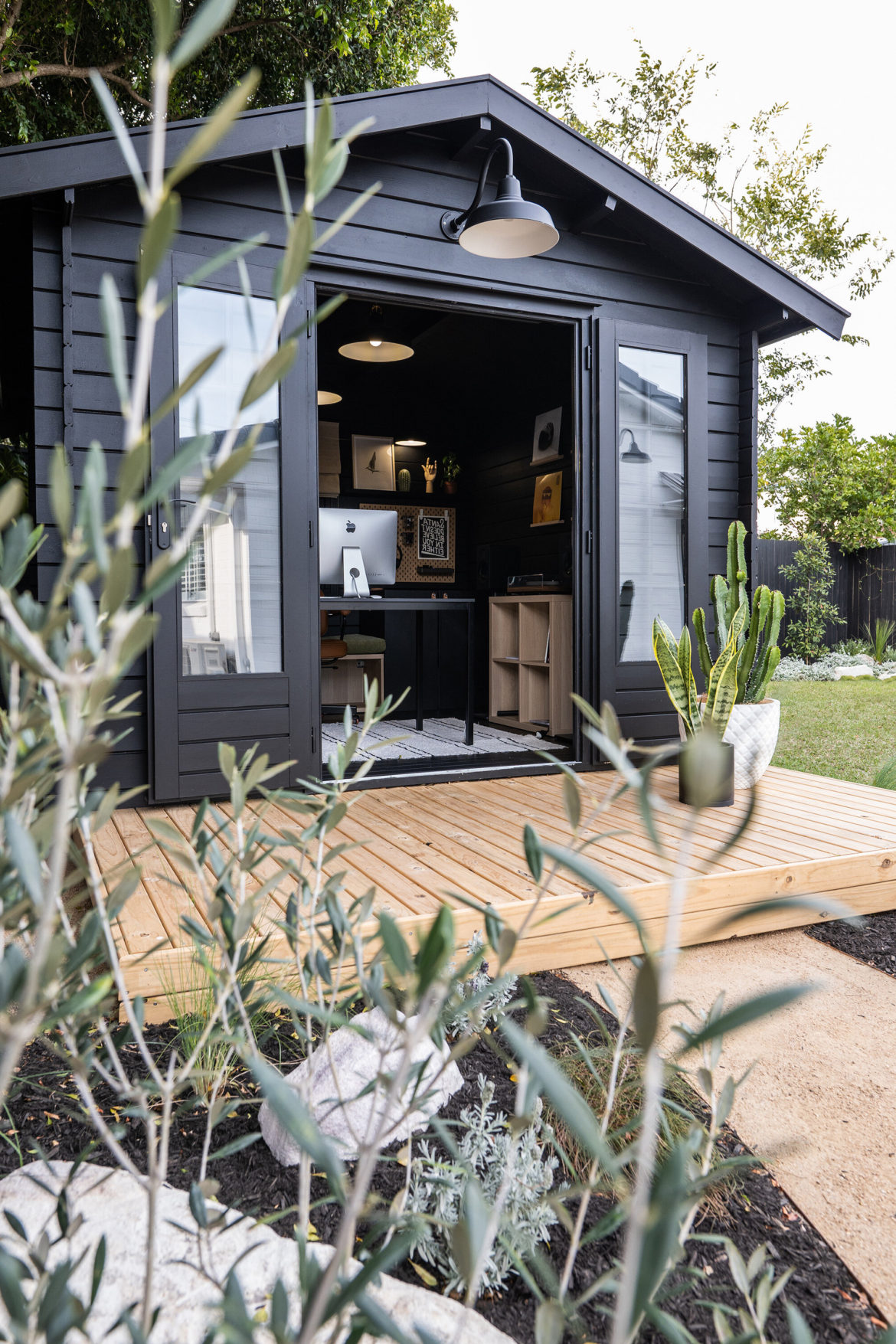 !n 1929, Virginia Woolf famously posited that in order for a woman to write fiction, she must “have money and a room of her own.” In 2020 Pinterest moms have one-upped Woolf by investing in small houses of one’s own, wine bar optional. The she shed is the wife’s response to the “man cave,” a separate, feminized space where she can relax away from her family, pour a bottle of wine with some girlfriends, or simply be alone (oh, to be alone!). As the name suggests, most are made from shabby pre-built lawn sheds; the hardware store Lowe’s even has a page on its website advertising guides on how to best construct one. But busted, dirty sheds these are not. By the time most she shed designers get done with their projects, they look like fully inhabitable mini-homes, often carpeted, furnished, and wired with electricity.

On Pinterest and Instagram, she sheds of all different flavors abound: modern and shiplap’d as if touched by the Gaineses themselves, rustic cottages ripped from a fairy tale, brightly colored to fit to reflect the crafting activities that happen inside of it. Reanne Rudd, 34, a real estate agent in Amarillo, Texas, discovered she sheds on Pinterest last year and was inspired to create her own as a place to hang out with her friends. With the help of her husband, Rudd bought a pre-built shed and fitted it with electrical wiring, shiplap, vinyl flooring, and a bar space. A video of the finished result, which includes furniture and a small electric fireplace, has over a million views on TikTok.

“[My friends] and I, all of us have kids, so we never really have a spot to ourselves like the guys do,” Rudd says. “They all have their shops and their man caves. Us girls don’t really have a space for ourselves.” Rudd says her she shed is a no kids allowed zone, though the kids do try to sneak in. “I have a little keypad on the door, so I keep it locked.” For Kirsten Hamstra, 39, the creation of her she shed was directly influenced by the pandemic. A social media director for a global company that requires her to take international calls at different hours, she and her husband quickly realized that there wasn’t enough space in their Raleigh, North Carolina home to both work in the same office, not to mention alongside their kids going to remote school full-time.

“I was talking with my parents about how we were trying to pivot and figure out what we are going to do about this office situation,” Hamstra says. “She was like, well, have you ever considered a she shed? I started laughing at her, like what are you talking about?” With a sizeable enough backyard, Hamstra ordered an Amish built-shed from a local company which allowed her to customize her she shed. The completed project is fit with electricity and internet, a desk, a TV, a mini-fridge, air conditioning, and a mini fireplace.

“I don’t have a space, a girly space of my own, something where everything inside is mine and everything inside kind of uniquely reflects me and my passions and what makes me happy,” Hamstra says, adding that she plans to hang photos on the walls of her trips to Italy, “her favorite place in the world.” “It’s not to say that I can’t have it in my own home, but to really have my own personal space where I can get away and take a breather…I wanted to be able to have a space where I could do that uninterrupted.”

The creation of a gendered space in the house for women has roots in the dressing room, which emerged in the Renaissance as a counterpart to a man’s “closet,” essentially a study. Whereas a man’s closet might house his papers and exist as a space for intellect, a woman’s dressing room would house “clothing, cosmetics, children, and servants,” the rooms helping to delineate a woman and man’s clear household roles Tita Chico wrote in Monstrous Dreams of Reason: Body, Self, and Other in the Enlightenment. In the 18th century, gendered living spaces in modern homes became more pronounced, as dressing rooms, toilettes, and boudoirs served as more private spaces of self-discovery for wealthy women, the latter of which was seen as a sphere of sexual expression in the age of the Enlightenment.

The home became even more aggressively gendered in the Victorian era, as women were expected to devote themselves to homemaking and express their identity through domestic pursuits. But while the home itself may have been a private space, for women to find autonomy and solitude within it away from domestic labor and organizing of her household was harder. “The space was not private in the sense of withdrawal,” Judith Flanders wrote in Inside the Victorian Home: A Portrait of Domestic Life in Victorian England of feminine “morning rooms” in spacious houses. “Because this is where the running of the household was done, it was part of the public persona of the house, part of the presentation a man of worth would display to the world.”

It’s the same impulse to escape domestic chores and duties, nearly inescapable in the home, that fuels the she shed phenomenon. A 2007 Los Angeles Times story titled “The shed goes chic” interviewed women and men who were rehabbing outdoor sheds into personal spaces like offices or art studios, while a 2008 Seattle Times article profiled a couple with a small business turning sheds into living spaces. “If you just add on an addition to the house, it’s still your house. It’s too tempting to be like ‘oh, crying baby, oh, the dishes,’” one woman interviewed said, stressing the importance of a space separate from the house. A 2010 New York Times story featured a woman’s “Gingerbread cottage” getaway in opposition to her husband’s man-cave, a mid-aughts trend that catered to suburban men seeking to create a masculine, almost bachelor-pad space in their nuclear family homes. But it wasn’t until a 2015 Today show segment that featured women and their she sheds that the term became mainstream, so mainstream that the term was featured in a viral 2018 State Farm commercial.

She sheds reflect a cottage industry of products, whether found mass-produced in the aisles of Target or on Etsy, that attempt to commodify a central mom experience. There are t-shirts and signs that stress that mommy is “in time out,” merchandise that proudly proclaims the #boymom tribe, and “mommy juice” wine glasses, all of which reflect and reinforce the image of the exhausted mother seeking refuge from her screaming children. Nothing says “leave me alone” more than a wine glass helpfully emblazoned with “go ask your dad.” The she shed—along with its spicier counterpart, the “bitch barn”—takes the trend one step further: why put up subtle walls to block off space for mom when she needs it through a variety of products when you can just literally build a space?

The she shed owners I spoke to for this piece confirm that their spaces were largely born out of a need for personal space, separate from their houses. But in the pandemic, she shed spaces have become even more urgent, as they become women’s offices and local drinking holes in lieu of actual nightlife. Jennifer Underwood, 35, initially intended for her she shed to be a space for her crafting projects which she sells online. She started building the she shed with her husband from scratch last September, but in the pandemic, with her two sons doing distanced learning in Riverside, South California, the she shed has essentially become a school.

“I am in there every day since covid started,” Underwood says. “I’m in there from 8:30 until 8:00.” Her kids are with her, she estimates, six hours a day with her inside the she shed. But once their schooling is done and her husband comes back from work, Underwood is back in the she shed for some alone time. And while she does work on her crafting while her kids do their work, what was supposed to be a space for herself alone is now a replacement for her kid’s daily school life.

“In the beginning I [was] like, this sucks, I’m turning it into a classroom and I have this little tiny space for a craft room,” she says. “[But now] I’m enjoying having them in there.” And even with its changed purpose, Underwood’s she shed still satisfies her crafty impulses.

The funny thing is as a kid I always wanted a dollhouse and I never got one,” she says laughing. “Finally, I get this 35 years later, and it’s extravagant.

9 Innovations That Show Clean Energy Can Look Good and Save the Environment, Too

Observations From a Gardener