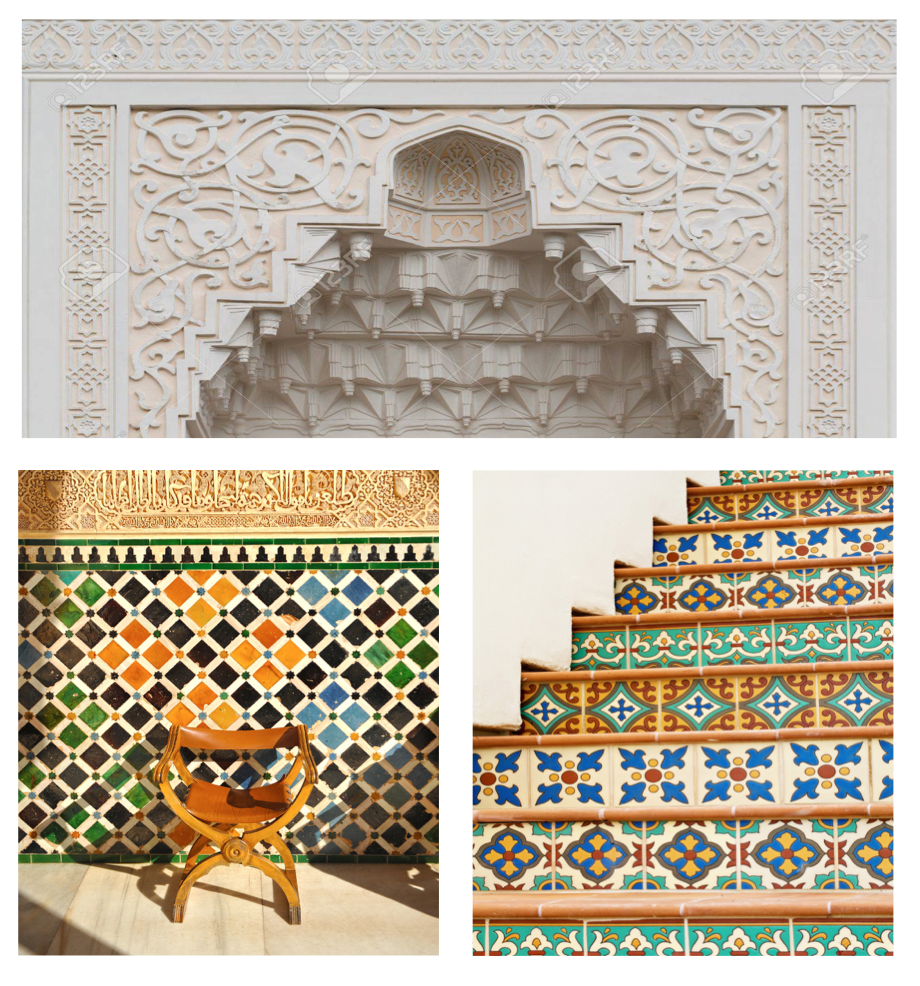 In the worlds of Art, Design, Architecture, display and others in this realm, motifs have been in existence for thousands of years. Interior Design and Decoration by Sherill Whiton best describes a motif as “a distinctive feature or dominant idea in an artistic or literary composition”. Every civilization has acquired its own motifs which in turn, defines the culture and place of origin. The oldest dated symbols or motifs which consist of thirty-two, specifically identified forms, appeared repeatedly in ancient caves throughout the entire continent of Europe. It is difficult to decipher what they all represent. Some appear to be feathers, wildlife, human and geometric forms. These symbols are repeated and combined into what appears to be some sort of message. The majority of the caves are found in Europe, North America, Africa, India, Asia and Australia.

One of the most intriguing symbols of our present day is identified as the hashtag (#) ! History repeating itself, perhaps? Fast forwarding to approximately 2600 B.C. to the oldest and most powerful examples of architecture, are the Pyramids of Gizah, near Cairo, Egypt. It is believed by some that the purpose of these buildings was religious since they were burial sites for dynastic kings.

During our travels throughout Mexico I had the extraordinary experience of climbing the Great Pyramid of Tenochtitlan, better known as the Pyramid of the Sun. Physical evidence has been provided that magical ceremonies and human sacrifices were performed there. While we were at the top of this ancient pyramid in Mexico, a plethora of professional photographers with their cameras and equipment were buzzing around relishing the opportunity. I will add that climbing the pyramid was not an easy feat for them since the pyramid stands 216 feet in height, and the steps are tiny. Does this mean the original builders were tiny people with tiny feet?! Point being is that one must navigate the steps at a slight angle and very cautiously. Walking down proves to be an equal challenge, especially if you are carrying equipment.

Next I move on to the ancient Greeks who were responsible for building the three classical orders. These were otherwise known as the Columns. To this day these type of architectural motifs have supported and adorned historical buildings such as the Parthenon in ancient Greece (circa 447 BC) and some of the most famous buildings in America, such as the White House, the Supreme Court of the U.S. and the U.S. Capitol, not to mention many others. The three types of Columns are the stylish Doric, the Ionic, with its scrolls, and the fanciest of all, the Corinthian. Once again, history repeating itself.

In Italy we have Brunelesci’s Dome, that covers the Florence Cathedral, considered one of the most significant architectural achievements due to its being built without an underlying wooden or iron structure to support the masonry work. Domes continue to be utilized in modern architecture, although the structural dynamics have been refined. In the same vein, the ever popular arch was utilized and refined by the Romans, who were the first builders in Europe to adopt and appreciate the advantages of the arch, the vault, and the dome.

One of the most popular Greek motifs is the Key, also known as Greek fretwork. It is a linear, geometric pattern and is incorporated into architecture, sculptures, art, mosaics, marble friezes and more. The Greek Key design motif is made up of a long, continuous line that repeatedly folds back on itself, mimicking the meandering river with its many twists and turns.

Fast forwarding to the time of the Middle Ages, religion was the dominant interest of Europe in that era. Architecture consisted mostly of church construction. Since the beginning of time until the present day, wars have been fought over religion. The motifs of churches changed according to the winner of battles and territories.

The most commonly recognized motifs are: the Christian cross which memorializes Christ’s death, the Star and Crescent which is an Islamic symbol, the six pointed Star of David which is the most recognized Jewish religious symbol, named after King David, the Menorah, an ancient motif which is based on a seven branded candle holder and the OM which is an important symbol of Hinduism. All of these symbols and also some that are not mentioned herein have been used in homes, religious buildings, works of art, sculptures, wrought iron works, textile patterns and much more. They have been major contributing factors to architecture and design. The Egyptians used the lotus flower, the sphinx, obelisks, pyramids and scarabs as prominent motifs.

Stained glass windows which originated approximately in 675 A.D. were important features in churches and monasteries. Interestingly enough, the process of coloring glass was most likely invented in ancient Egypt. The famous Rose Window at Notre Dame in Paris is a part of a prominent example of Gothic architecture in France. The trio of immense round stained glass windows shine gloriously over the cathedral of Notre Dame’s main portals that date back to the 13th century. Luckily, these windows were not damaged by the recent fire to the Notre Dame Cathedral.

The ornamental shell motif (scallop shell) has a long and diversified history. In primitive civilizations, sea shells were used as money. To the Greeks and Romans, the shell symbolizes fertility. The famous Botticelli painting, “Birth of Venus”, (circa 1484) shows the symbolic feminine figure of Venus being lifted from the sea on a beautiful, scalloped shell. Eighteenth century furniture makers were quite fond of incorporating the shell into their designs to glorify nature.

Spanish architecture is a conglomeration of cultures dat-ing back to the Egyptian, Moorish, Persian and Mediterranean styles, to name a few. Beautiful painted tiles adorned walls, floors, backsplashes, etc. Wrought iron gates, mostly painted black, were of elaborate scrolling designs, a well as iron window grills with arabesque designs were commonly utilized. Saltillo tile, cantera stone, and the famous Talavera handpainted tile and pottery originated in Spain; though by 1580, Puebla, Mexico had become the center of Talavera production in Mexico. The Spanish tile roof incorporates gorgeous tiles that create texture and color. The one-piece barrel design creates a pattern of ripples across a roof.

In my quest to abide by my allotted word count I will mention a few more historical motifs with little description. The finial is an ornament used as a terminating motif, usually in the form of a knob, pineapple or foliage. Finials are found topping lampshades, curtain rods, flagpoles, bedposts, etc. The Fleur de Lis is the conventionalized Iris flower used by former kings of France as a decorative motif symbolizing royalty. It is a motif often associated with Joan of Arc.

Another motif that is not nearly as old as the others I have described, being that it is only 243 years old, is the American Flag. Its design originated on June 14, 1777, in Philadelphia, U.S.A. The thirteen red and white stripes design combined with a union of 13 white stars on a blue rectangle field, represented a new nation dedicated to personal and religious liberty. Today’s modern version contains fifty stars representing the fifty states of the nation. The red stripes stand for courage and integrity of the American people. The white stripes stand for liberty and equality. The blue is the blue of heaven, loyalty and faith. A government of the people, by the people, for the people…” from Abraham Lincoln’s Gettysburg Address in 1863. On this note, I do part.