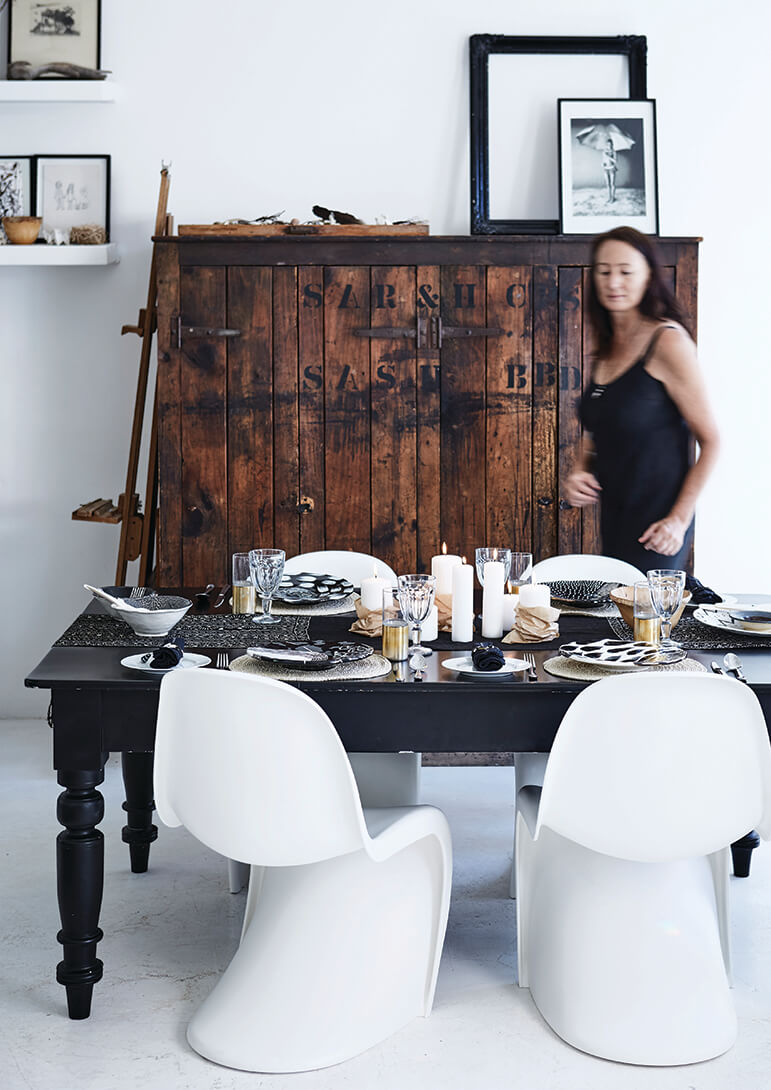 Christmas decorating is redefined at the home of stylist Shelley Street where handmade gifts, traditional elements and a nod to monochrome Scandi style combine for an intriguing festive fusion. 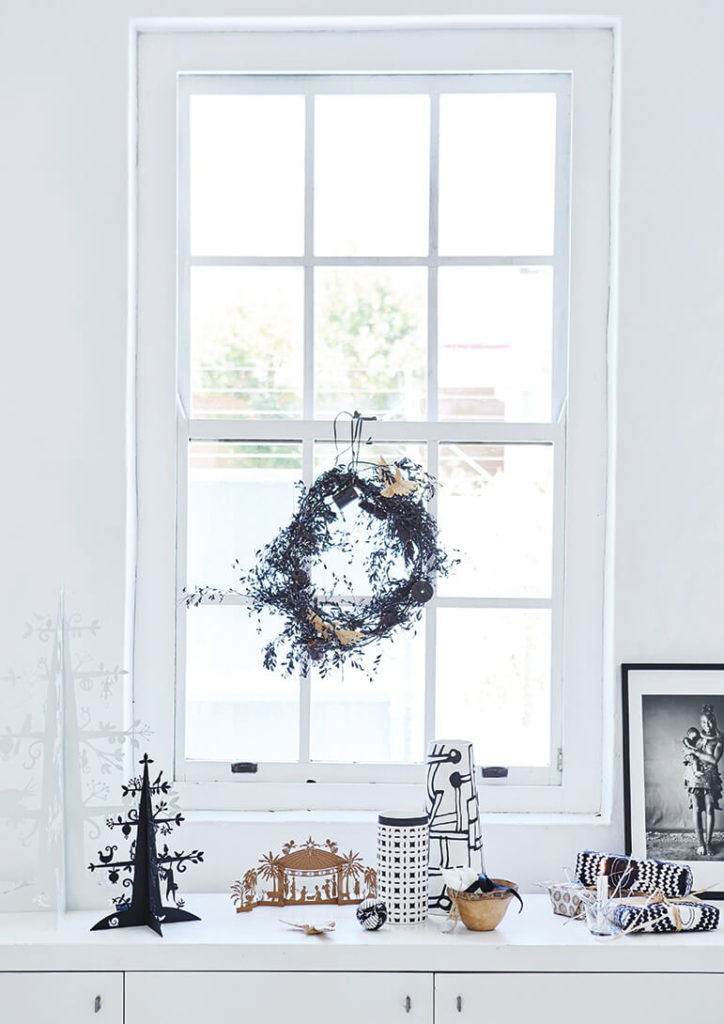 One of the most enviable features of Shelley’s home is the large industrial-style windows that let in masses of natural light. The wreath hanging from one of them was made by Shelley using Cape fynbos (an indigenous bush) which she found while walking in the veld. To build up the texture, Shelley added bits of wood, old corks, and a few pine cones also found whilst on her walks. She sprays painted it matte black and added hand-carved birds.

We love this time of the year but aren’t big on celebrating the traditional way, especially here in South Africa where our summer is so hot. We like to make the season feel special though by doing something different with the festive decorations each time.’ In this instance the ‘we’ is stylist and creative consultant Shelley Street and her teenage daughter, Phoebe. The ‘something different’ that she’s referring to is a striking monochrome palette that Shelley has fashioned by incorporating cool local crafts with organic elements – a signature that underpins Shelley’s personal decorating style as well. 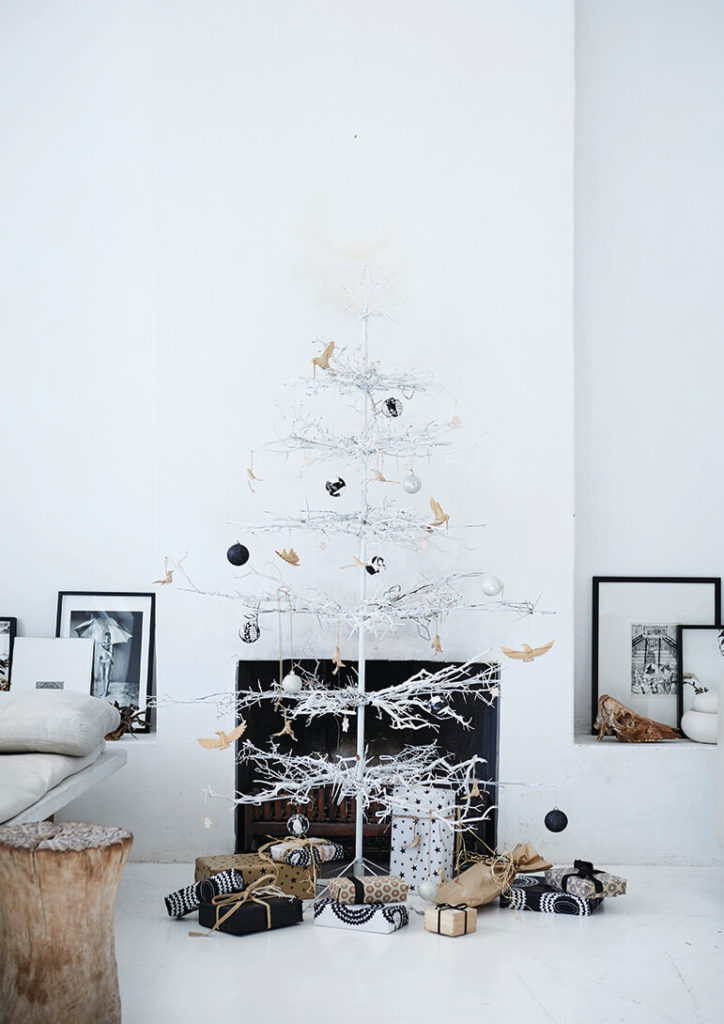 A small Karoo thorn tree has been painted white to striking effect. The black, white and natural tones of the decorations reflect Shelley’s overall
visual theme – one that is pared down, textural and non-traditional.

I love the monochrome look as well as Scandi design and its association with light wood, so decided to do a Scandi-Afri mix,’ she says of her Christmas theme. It seems apt considering Shelley’s self-professed reverence for simplicity that the Christmas tree is a Karoo thorn, its stark graphic form enhanced by a coating of white paint. ‘This wouldn’t be Christmas though, if there wasn’t something enchanting, so the tree has the sweetest hand-carved wooden birds which I am in love with as well as papier-mâché baubles that are a quirky take on the usual bling versions,’ she says. 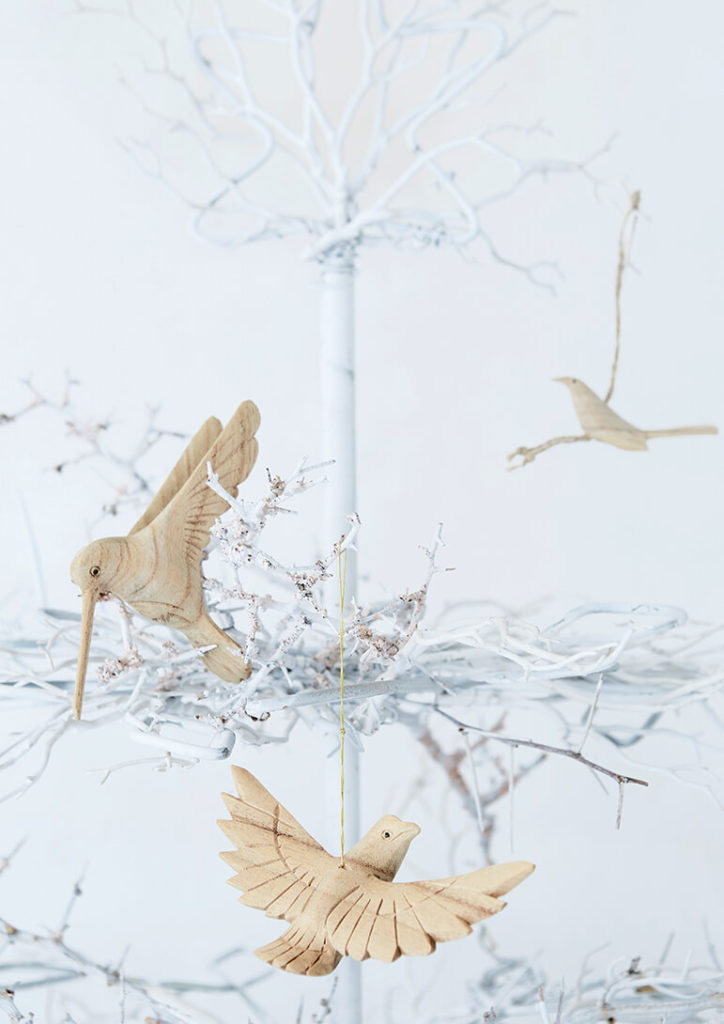 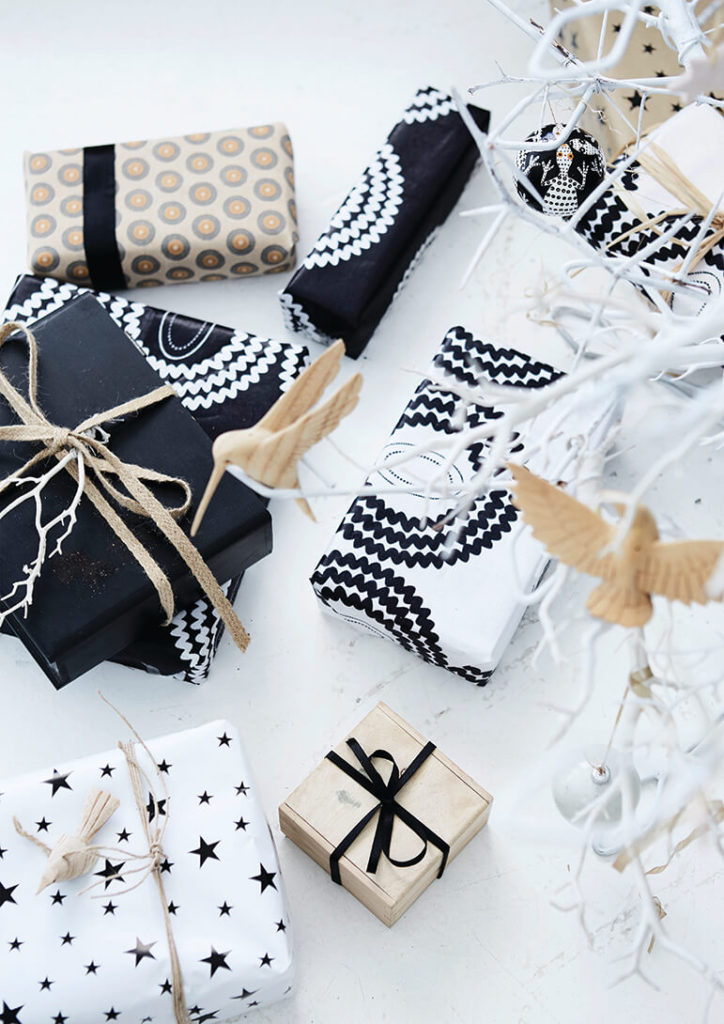 Gifts have been wrapped in a mix of simple brown paper, graphic store-bought wrapping paper an idea inspired by the Japanese practice of furoshiki (wrapping presents in textiles rather than paper) and finished with ribbon and raffia ribbons.

Other adornments reflect Shelley’s affinity for pattern as well as locally crafted objects with a unique, whimsical feel: a laser cut cardboard nativity scene; a small Christmas tree made from tin; Christmas crackers that she fashioned together using patterned brown paper; a herd of beaded zebra that, in this context, look less ‘curio kitsch’; and a black wreath that, from a distance, looks like something designed by Tord Boontje but is in fact made from pieces of fynbos (indigenous bush), wine corks and other natural ephemera shaped together and spray-painted black.

“This wouldn’t be Christmas though, if there wasn’t something enchanting, so the tree has the sweetest hand-carved wooden birds which I am in love with.” 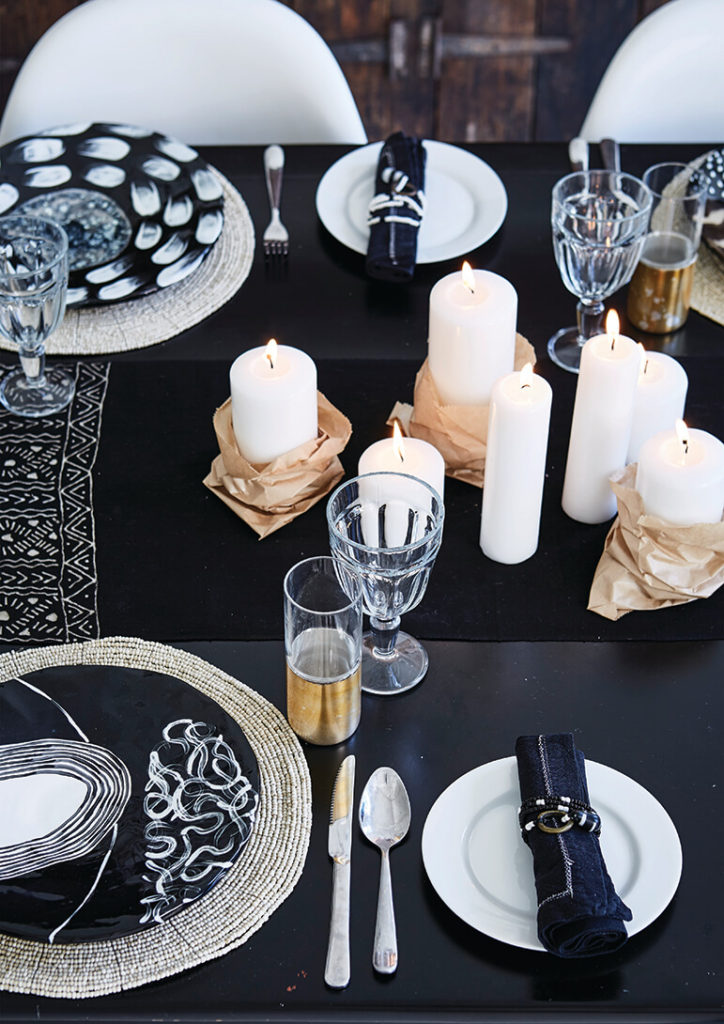 The table decorations consist of crisp white items as well as patterns underpinned by strong black accents, the subtleties to be discovered in the layering of materials, tones, and textures. The starting point for Shelley’s mix-and-match approach was a collection of plates. With the simplicity of white candles wrapped with utilitarian brown paper, the mood is contemporary and fresh.

Shelley’s black lacquered turned-leg pine table (a fortuitous junk shop find) is always the focus of the festivities each year. ‘The starting point of the whole theme was a collection of black and white plates by acclaimed local ceramist Martine Jackson,’ explains Shelley. Many of the table decorations are an eclectic union of new with old, black and white, solids and patterns, everything underpinned by strong black accents. Here the subtleties are to be discovered in the layering of materials, tones and textures such as beaded placemats, a coarse hand-woven table runner, bone and wood serving utensils all vintage silverware and serving platters as well as creative surprises: beaded necklaces used as napkin rings and simple white supermarket-bought pillar candles of various sizes wrapped in brown paper.

‘All the colors work really well within my home and are not out of place amongst my collections of natural objects,’ says Shelley. ‘So even though the Christmas decorations are temporarily here, everything still works together on the eye.

“Christmas is spent with family and friends and I prepare as much as possible the day before so I can relax on the actual day.” 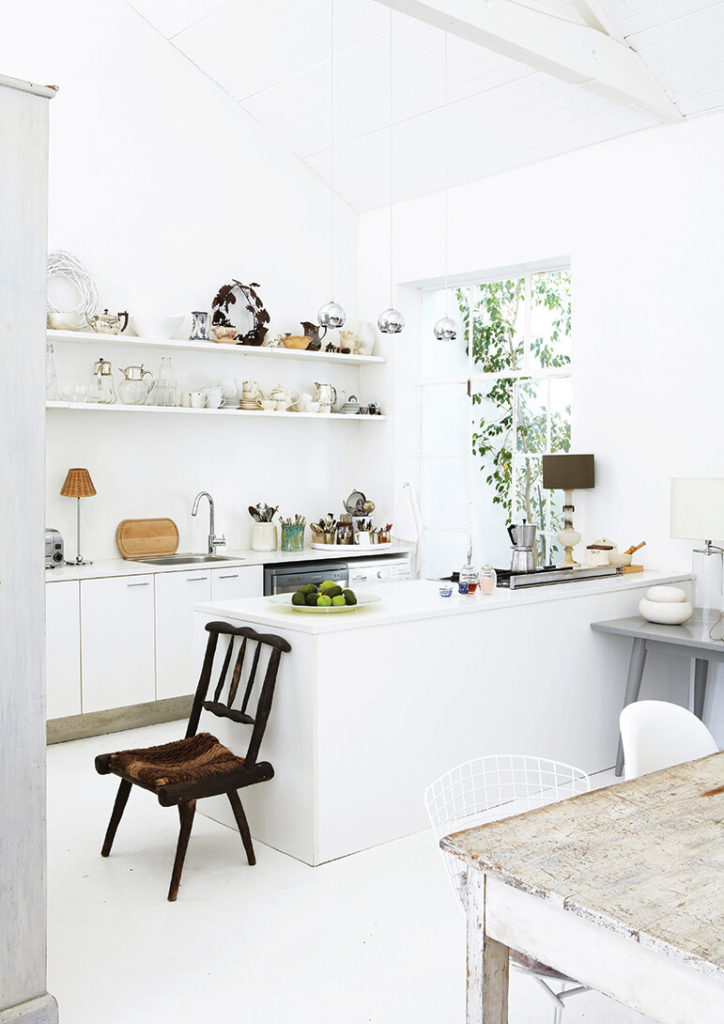 The open-plan kitchen is the scene of many collaborative efforts by Shelley and daughter Phoebe and is an inviting but practical, utilitarian space. Floating shelves host everyday objects as well as special collectibles and inherited objects. The palette is largely all-white with wood. The hanging lights are original 50s pendant shades.

Christmas is spent with family and friends and I prepare as much as possible the day before so I can relax on the actual day,’ says Shelley. Turkey and trifle don’t feature on the menu. Rather, the table is laden with unusual fresh salads, an assortment of meats (lamb, Parma ham, simple roast chickens and gammon), potatoes with rock salt and rosemary, and for dessert ‘always slabs of dark chocolate, panettone, Italian panforte, great local wines, enough cheese to sink a ship, fresh cherries and vanilla bean ice-cream. Let’s just say no one goes hungry,’ she laughs.

Everyone arrives around 12 pm, we open presents, chat and then head to the table around 4 pm. Lunch extends into the evening when we light candles, turn on the fairy lights and carry on until we all begin to fade. Sometimes Phoebe (who is a talented musician) treats us to her piano tunes or plays guitar and we all sing along – alarmingly out of tune but with an ‘A’ for effort. The place is a happy mess by the time everyone leaves and I don’t do anything except load the dishwasher. It’s always memorable for being a relaxed day with an abundance of the best sort of laughter – the kind that makes your cheeks ache. 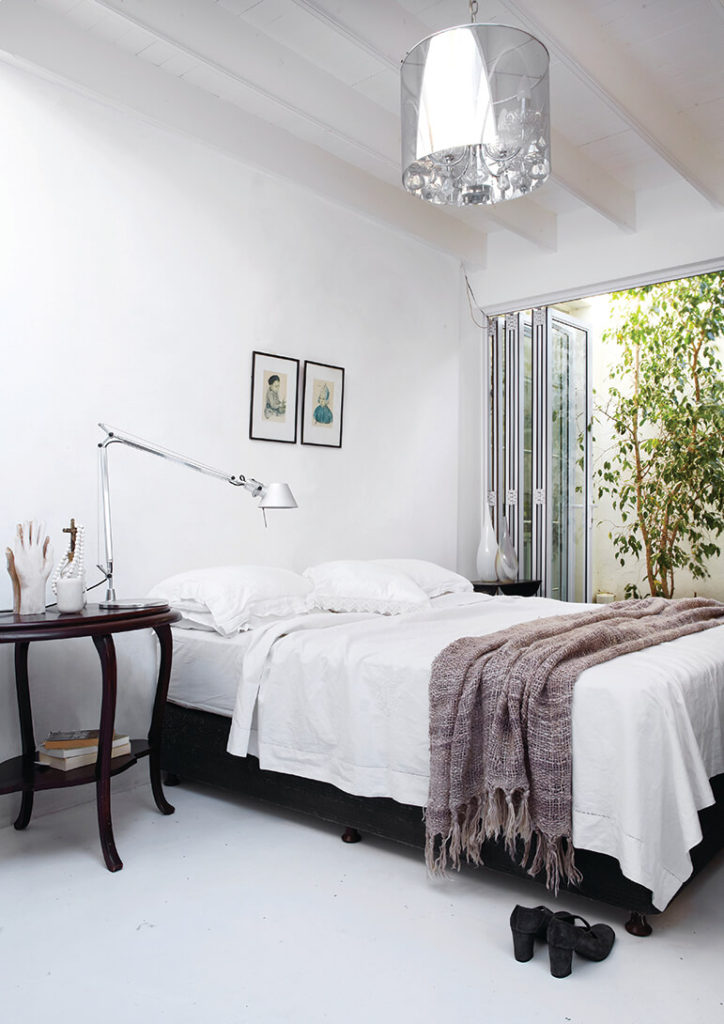 Shelley’s bedroom. The space has a simple and unadorned purity. The decoration is limited with the exception of a small bedside vignette, two watercolor paintings inherited from her Dutch grandparents.