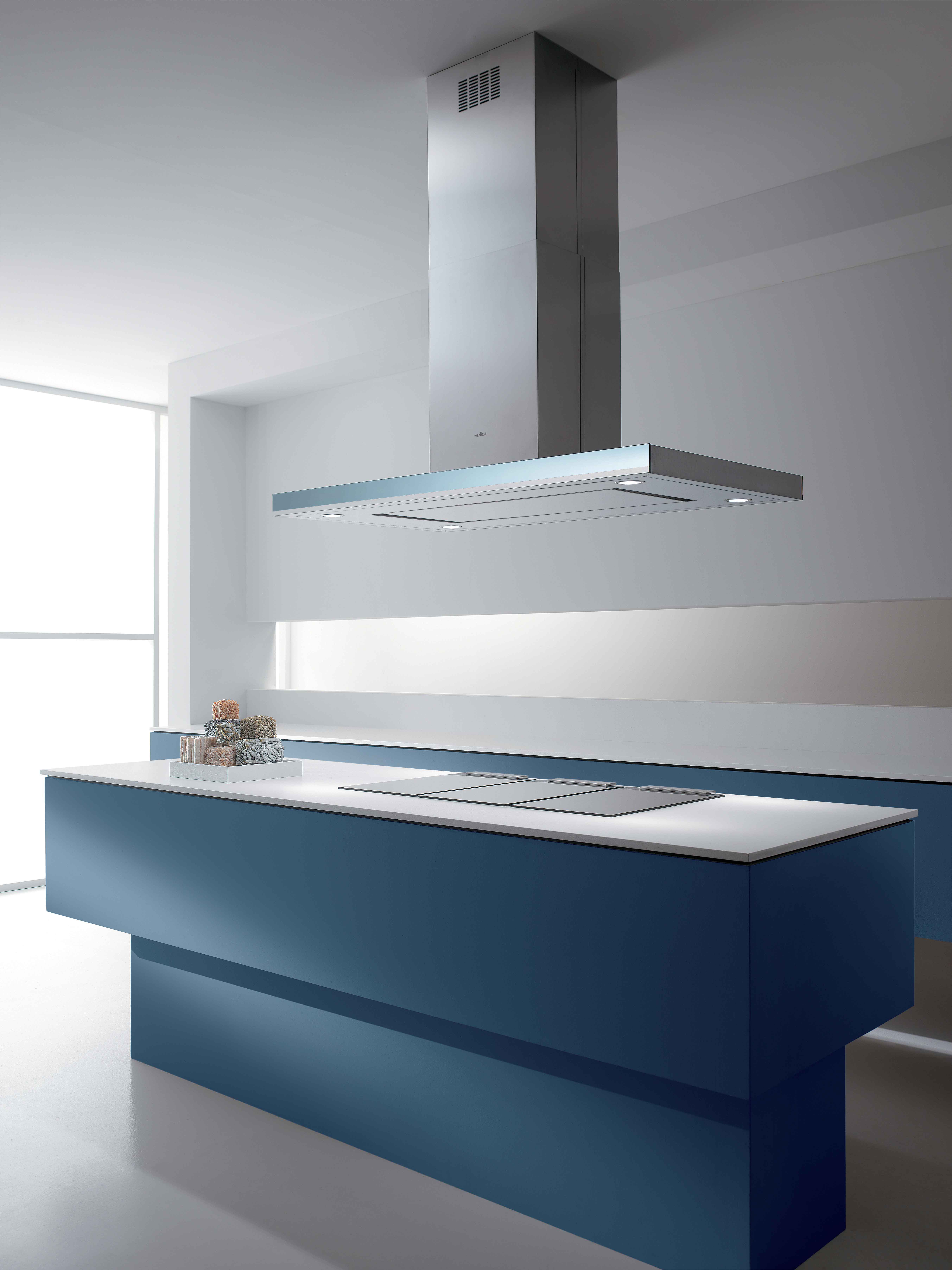 A range hood fits over a cooking surface and is designed to filter or remove airborne particles, including odors, grease, fumes and moisture, out of the air when you cook. Also known as ventilation hoods, exhaust fans, extractor hoods and stove vents, range hoods provide you with clean, healthier air while preventing moisture and grease from building up on kitchen surfaces. Because home kitchens come in various layouts and styles, different hood types fit different setupsand decors.

About Range Hoods
The three primary types of range hoods are the standard under-cabinet hood, the wall hood and the island hood. All three hood styles have the same basic design, with a canopy or skirt extending over the cooktop to catch any airborne particles. The hoods contain filters that catch grease and moisture, exhaust fans that suck in the particles and ductwork that exhausts the unwanted particles to the outside of your home.

Island Hoods
Use an island hood over peninsula or island ranges located away from kitchen walls. The hood itself hangs down from the ceiling and vents through ductwork that runs through the ceiling to the outside. Because island ranges have no cabinets or walls around them to help funnel the airborne particles into the exhaust fan, this type of hood requires a more powerful fan and needs to be a minimum of 6 inches wider than the range surface for optimal venting performance. Island hoods really stand out in your kitchen, so most come in gleaming metals and bold designs that make strong decorating statements. These stylish range hoods typically cost the most and usually require a professional to install them.

Under-Cabinet Hoods
A kitchen range with a cabinet hanging over it requires a standard under-cabinet hood installed over the cooktop. As the name implies, this style mounts beneath the cabinet, and the ductwork placed inside of the cabinet vents the airborne particles to the outside. Because the cabinet hides the ductwork, most under-cabinet styles tend to be very plain and functional, coming only with exhaust fans and lights. Under-cabinet versions might not be as decorative as other hood styles, but they still have their advantages. These hoods typically cost significantly less, perform effectively and work well in kitchens where space is at a premium. In addition, if your kitchen already has the ductwork installed, you can usually install a new under-cabinet

Ductless Range Hoods
Ductless range hoods are inexpensive and might be the only option for a cooktop in an area where you can’t easily install ductwork. Ductless hoods don’t remove airborne particles from your home. Instead, they draw the particles away from the cooktop and simply redirect them to other parts of your kitchen. The hood filters can effectively trap grease, oil and odors, but they don’t eliminate the heat, smoke and steam generated by cooking activities.

Wall Hoods
In kitchens without cabinets over the cooktop, wall hoods mount onto the wall and exhaust to the outside via exposed vent stacks. Wall hoods usually perform slightly better than the under-cabinet models, but they also cost quite a bit more. The extra money generally gets you a few perks, however, such as more powerful exhaust fans, electronic touchpad controls and halogen lights. Because wall hoods are large and visible, most have decorative wall chimneys and come in various attractive materials to match the style of your kitchen. Many models come in a sleek stainless steel for contemporary kitchens, but those who prefer more of an Old World charm can choose hoods made from stucco, wood, copper or stone.

Ancer Pools, Brings on the Fire!

Mediterranean Splendor at the Resaca