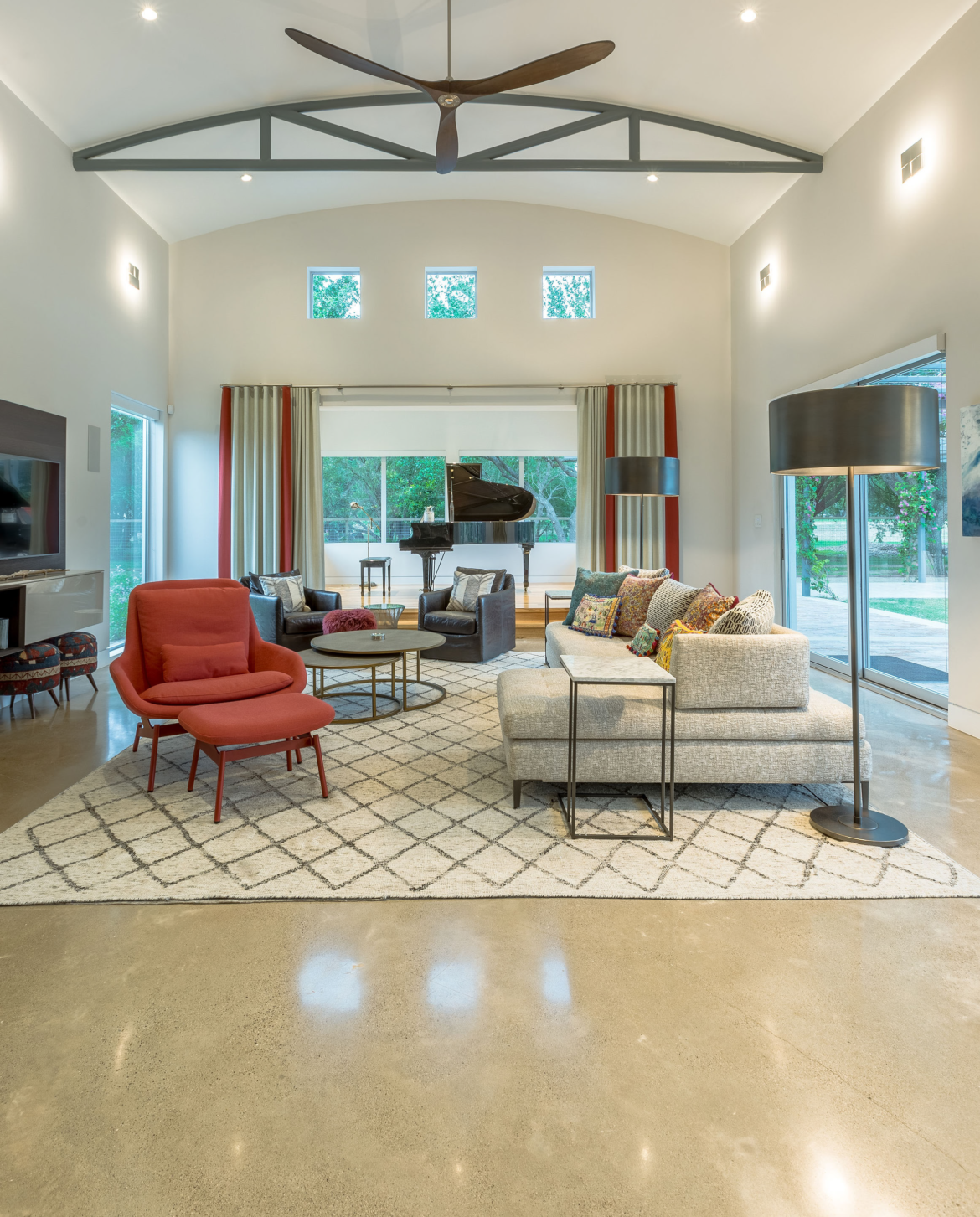 At first glance, this home, which is set back from the busy street, seems very simple and unassuming. Once you arriveat the front gate you begin to notice many of the small details that make you realize there is much more to this home than originally meets the eye. When the present homeowners saw this beautiful property for the first time it was empty except for a line of stately oak trees and a soccer goal. For a time, they weren’t sure if it would ever be theirs. The original owners were reluctant to sell their property for sentimental reasons. In the early 1980’s, the father and son had worked together planting twenty-five oak trees and the son wanted to ensure that the trees would remain and continue growing there. When this former owner finally agreed to sell, it was with the understanding that a plaque would be placed on one of the trees in honor of his father. Three years after the sale was final, the property was filled with the current owners’ vision of a unique, modern take on a Hacienda-style home.

Upon arriving at the front of the home we passed through a large Spanish cedar gate set in a gabion wall. This type of wall is a cage or box that is filled with rocks, concrete, or sometimes sand and soil for use in landscaping, road-builing, civil engineering, or even military applications. The house itself is covered with an industrial-looking material called Coreten, or “weathering steel” which is metal siding made in two layers.

The inside layer consists of a metal that doesn’t rust. The outside layer is made to intentionally oxidize and rust. A hand-troweled Portland cement finish covers the remainder of the exterior walls. The builder, AJ, created sample after sample for the owners before the final application was approved for just the right finish. Next he worked quickly in small batches to cover the exterior before the cement could dry.

Inside the front gate, the weathered brick pavers on the walkways lead us past a small casita meant for guests on the left side and the garage on the right. The homeowners open up the garage for outdoor events and parties, which are made even more inviting with a sunken fire pit on one side and a basketball hoop on the other.

While the homeowners are both active in the local community, entertaining, and hosting events in their home, they also participate in triathlons. A wall of medals in their home gym speaks to their healthy lifestyle. They have participated in triathlons in New York City, Houston, and Boston. At one time the husband held the record of the fastest time for the Ironman competition in the Rio Grande Valley.

Inside the house, the entry opens onto an open-concept living room, dining area, and kitchen with high ceilings and floor-to-ceiling windows, which have a view of the back garden. To one side, there is a jewel-box of a powder room with walls that are covered in a lively green and blue wallpaper. In the living room, a raised dais with a grand piano creates a stage for concert events with the Valley Symphony Orchestra or even impromptu family concerts. The wife is a classically trained violinist and each of the children plays an instrument as well. The dining area looks out onto an impressive view of the long, narrow pool, which is perfect for swimming laps and preparing for a triathlon. On the evening of our interview and tour of the home, the golden natural light set off the clean lines, and modern Industrial style of the home’s interior.

In the kitchen, the custom cabinets by Unico were a collaborative design between the husband and interior designer Aimee Escamilla of Studio E in San Antonio. The book matched waterfall countertops of classic stat-uary marble are the perfect setting for the Galley sink which has customizable inserts that can be rearranged, as needed, for entertaining.

The Miele range had already been installed when the homeowners realized they needed to find the water line in order to make the roaster/steamer functional. The final builder, who was brought in after some of the building had already begun, had spent quite a bit of time walking the house and familiarizing himself with the plans before moving forward with finishing the house. He had an idea of where the water line might be so he took a chance and used a jackhammer to open up the floor. This resulted in his “hero moment” when he successfully found the right location of the water line.

In the Master wing, there is a cozy den, a convenient home gym which is adjacent to the master bath, hers & his closets, and the calm and cool master bedroom at the end of the corridor with a relaxing view of the trees outside. In the Master bath, the custom fixtures were hand-made and hand finished in New York. The high, barrel ceilings in the bedroom show off the exposed ceiling trusses and shiny silver ductwork, which enhances the Industrial feel of the home.

An opening above the kitchen sink gives you a view to the wood and steel staircase that leads to the second floor. The staircase was special ordered from Philadelphia. The home’s windows had already been installed when the staircase arrived. The very substantial, fully assembled staircase was dropped off in one large piece at the home’s curb and the builder had to then figure out how to get it inside the home. AJ thought he and his crew could lift the stair assembly by hand to move it inside, but soon realized they would need to get creative.

First, they used a forklift to raise it over the front wall. Next, he called a wrecker service to come and lift the stair case further into place. The wrecker’s truck was parked under the back patio and then the windows were removed in order to make room to bring in the stairs. It took a total of ten people to roll the 2,300 pound staircase on dollies. Before beginning this phase of the staircase work they told the homeowners, “Don’t come home. We’ll call you when we’re done.” Then they took cables and stretched them across the second floor, connected them to the truck, and winched the staircase inch by inch into its final place in the home.

On the second floor is the children’s bedroom wing. Like the master bedroom wing on the first floor, the bedrooms open onto a wide hallway with floors made of rip-sawn white oak. All of the home’s bedrooms were originally intended to be open to the back garden, which is in keeping with a traditional feature of a typical Hacienda-style home. In this case, the gallery is closed in with large floor-to-ceiling windows that have a view of the outdoor pavilion and pool. The pavilion itself is on the opposite side of the garden from the house. It has an outdoor kitchen that is fitted with Coyote appliances. Next to the outdoor kitchen there is a Bocce court, which is attached to the pavilion. This court can also be used for playing horseshoes when the homeowners entertain guests. The floor-to-ceiling windows are also doors which pull back to open three of the walls to the outside.

The Pavilion itself is on the opposite side of the garden from the hous. It has an outdoor kitchen that is fitted with Coyote appliances. Next to the outdoor kitchen there is a Bocce court, which is attached to the pavillion. This court can also be used for playing horseshoes when the homeowners entertain guests. the floor-to-ceiling windows are also doors which pull back to open three of the walls to the outside.