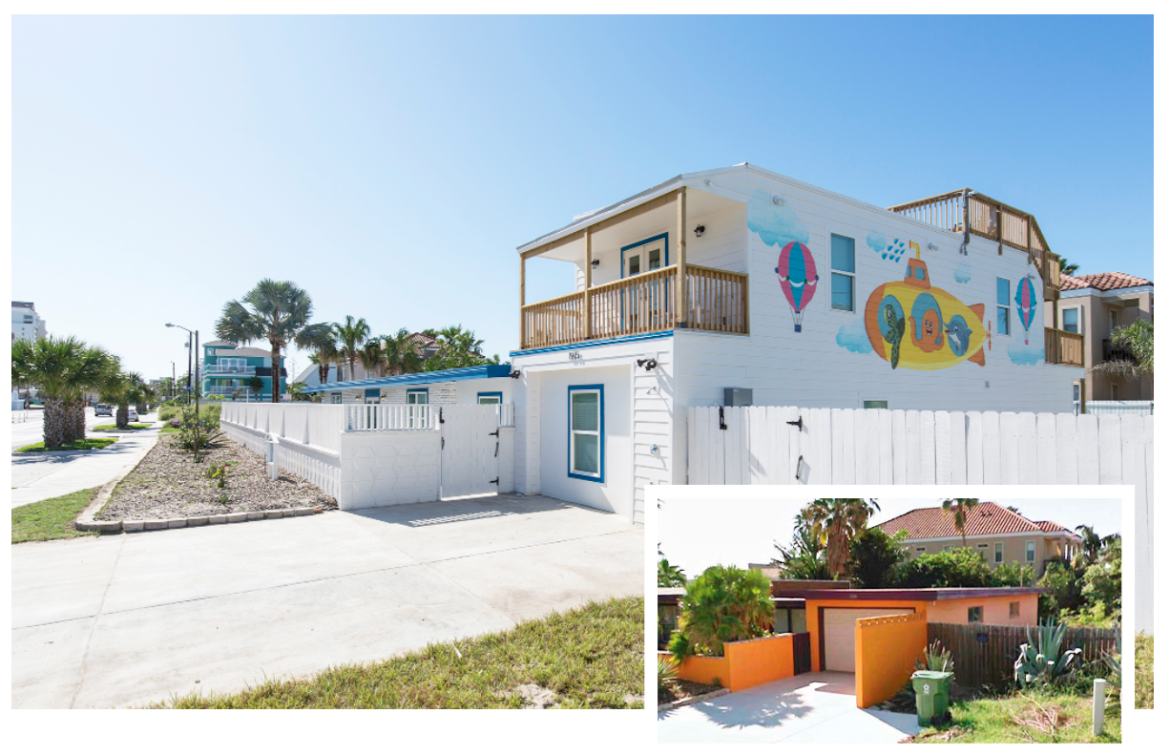 It was 1962 – the population of South Padre Island was It would be more than a decade before the Queen Isabella Causeway was built. James Bond was making his debut in Dr. No. Beach Music was the rage and it was also the year that the Beatles made their first recording, Love Me Do. John Glenn was tapped for his historic space flight while NASA set its aim for the moon. Construction began on the 1915 Gulf Boulevard beach house.

Fast forward to 2020…open up your sunroof to smell the salt air and feel the gulf breeze in your hair as you drive across the Queen Isabella Causeway. Turn left on Padre Boulevard and next take a right on East Palm and your destination will be on the left. The beach house at 1915 Gulf Boulevard has come full circle with plenty of modern conveniences. The property is perfect for a fam-ily or a group in search of a relaxing, team-building facility. Look for the surf wall, the whimsical whale and other exterior, nautical murals that distinguish the beach house. You have arrived!

According to Shamrock Builders’ Scott Finney the original builder remains a mystery. Scott is very passionate about having preserved as much of the original structure as possible in collaboration with owners Hock Yong and Chia Lin Chiang in order to restore and expand one the of first beach houses ever built on the island. It is one of the coolest places to stay on South Padre and it is literally built at the highest elevation on the island. Scott says that the house was extremely well built.

The three-foot-wide soffits are rarely found on newly constructed homes and cast ample shade throughout the day. The low-slung soffits along with the thick walls keep the tempera-ture of the structure very pleasant, an attribute noted by Scott during the building process. All of the electrical, climatization, and plumbing systems have been updated. The garage, added in the 1970s along with the carport, presented an opportunity for Chia to dream about expansion.

Scott laughed when he recalled that it was extremely difficult to bulldoze the breakwater from part of the double lot for the renovation. He said that he is used to “building things, not taking them down.” The remaining portion of the iconic decorative cinder-block surf wall was designed in 1962 to be a barrier and to greet guests entering from the Gulf Boulevard side of the property. The exterior siding is composed of painted, rusticated, roman brick. To help protect the interior, an outside shower was built for rinsing off sand from the near by beach.

Leave your stress at the door! The exterior walls are fortress thick. Guests enter and gain access to the self-contained luxury. Quietude abounds once inside this Gulf Boulevard property. Each room is well insulated and extremely peaceful. The house unfolds from a newly located open-concept kitchen and living area into secluded guest quarters. Relax in the common spaces that overlook the private outdoor sports court. The original terrazzo floor has been retained in the main living spaces and the existing interior walls are made of a soothing, oversized, clay brick with ample mortar joints. The original 12” tongue and groove yellow pine ceiling still graces the great room and the southwest bedroom. According to Scott: “It is like stepping back in time” when you enter that room.

One completely original, white tile bathroom exists on the ground floor. The kitchen counter tops are made of easily maintained quartz and the attractive tile backsplash is a nod to the original surf wall. There are nine bedrooms and five bathrooms tucked away in the North and South wings of the house. Each bedroom is appointed with comfort, simplicity, and easy maintenance in mind. What was once a breezeway has become an interior game room.

There are plenty of televisions if your favorite game is on. There is an on-suite bedroom, a favorite of the owners, that is perched at the top of the spiral staircase and boasts a private balcony. At the bottom of the staircase is a convenient and centrally located dry bar and laundry room that leads to all exterior spaces. Grab your martini – shaken, not stirred, and head outside for a little fun in the sun or moonlight.

The property owners are world travelers and know how valuable it is to have the feeling of having a home to return to after exploring. Enjoy your own private park. Anyone care to putt on the green? Shoot a few hoops on the court or in the pool. Have your own World Cup on the turf. Let the kids play on the private swing set. Care for a dip in the year-round swimming pool? Take a turn on the water slide or relax in the secluded jacuzzi.

There are lounging areas and ample opportunities for leisure. Close by, there is an access connecting you to the exterior staircase and rooftop deck. A 360 degree vista awaits you, perfect for viewing the stars, sunsets, and future rocket launches. Become a part of the long legacy of 1915 Gulf Boulevard on South Padre Island. Here, there is something for everyone.