In 2008, Hurricane Dolly ripped through South Texas, leaving behind a wake of destruction, flooding, and millions of dollars of damage. One casualty of the storm was South Padre Island’s original fire station, built in 1972. It was a devastating loss, but nevertheless, provided an opportunity for a new beginning. Now standing in its place at 106 West Retama Street is South Padre Island’s new Central Fire Station, a three-story, 20,000 square foot facility like no other. The distinctive form of the building developed as a blend of hurricane resistant construction and attractive contemporary design in a casual island context.

Needless to say, one of the top priorities in the design of the new fire station was the ability to resist the effects of future hurricanes. The structural concrete slab rests on drilled piers up to four feet in diameter and seventy feet deep. The building’s superstructure is comprised of reinforced concrete columns, beams and floor planks, with concrete masonry infill forming the exterior shell. The entire system is engineered to resist over 150 mile per hour wind gusts. Sounds like a giant concrete bunker, right? Far from it; the concrete shell is clad in vibrant colors of brick, stucco, and composite siding that complement the island aesthetic. The entrance to the building is marked by tensile fabric shade structures reminiscent of the kites and sails one might find at the beach just a couple blocks to the east. 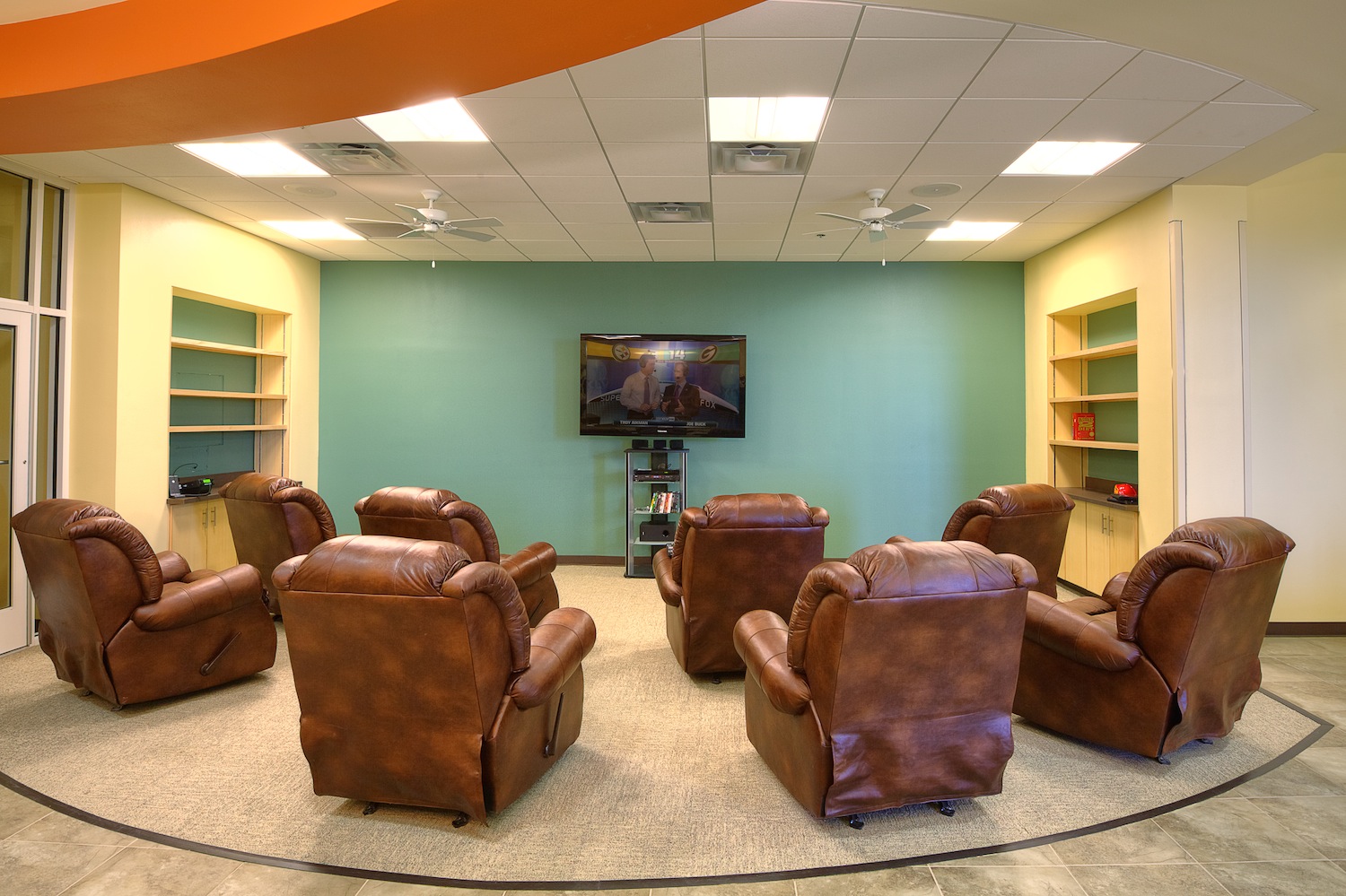 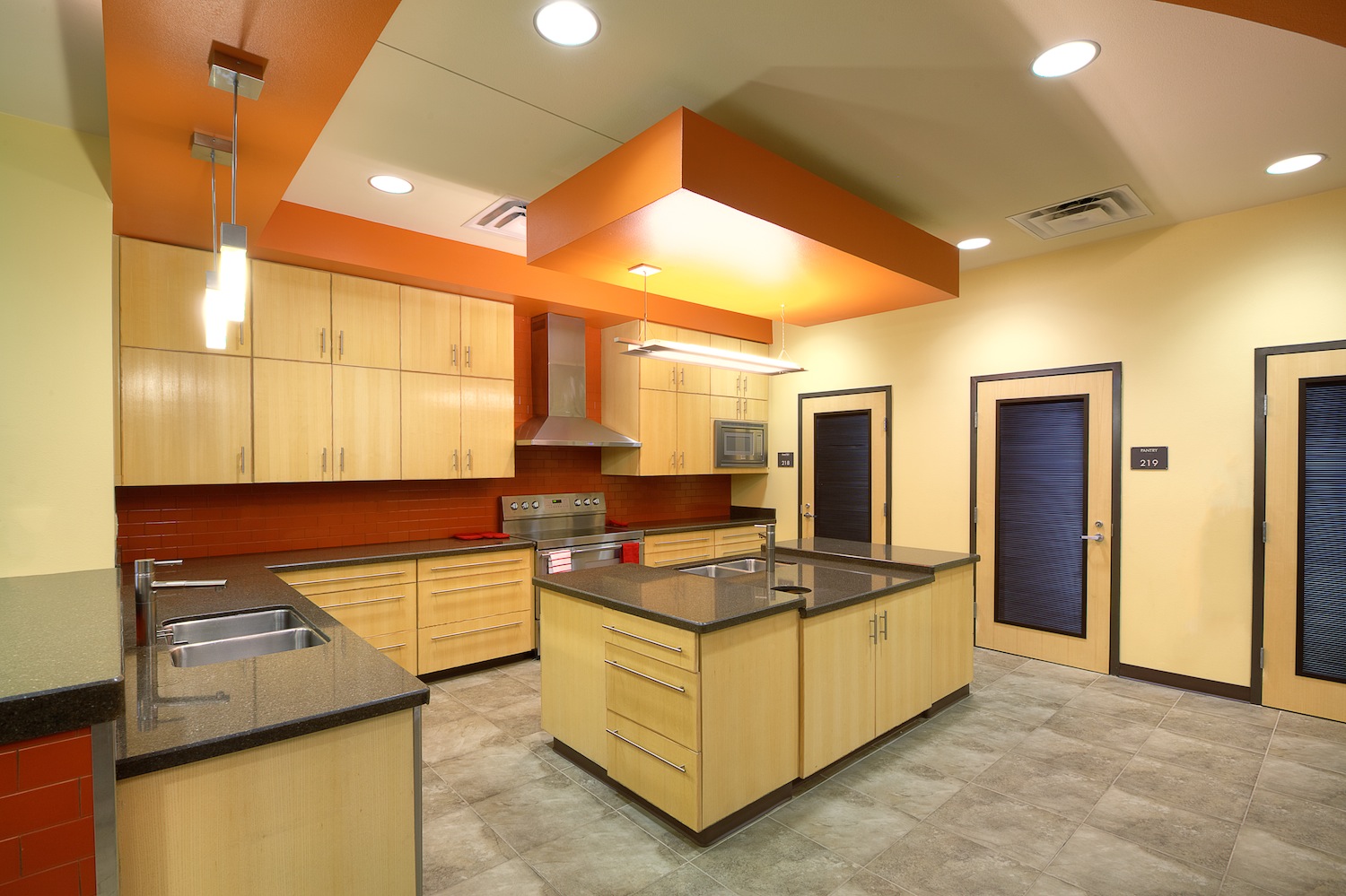 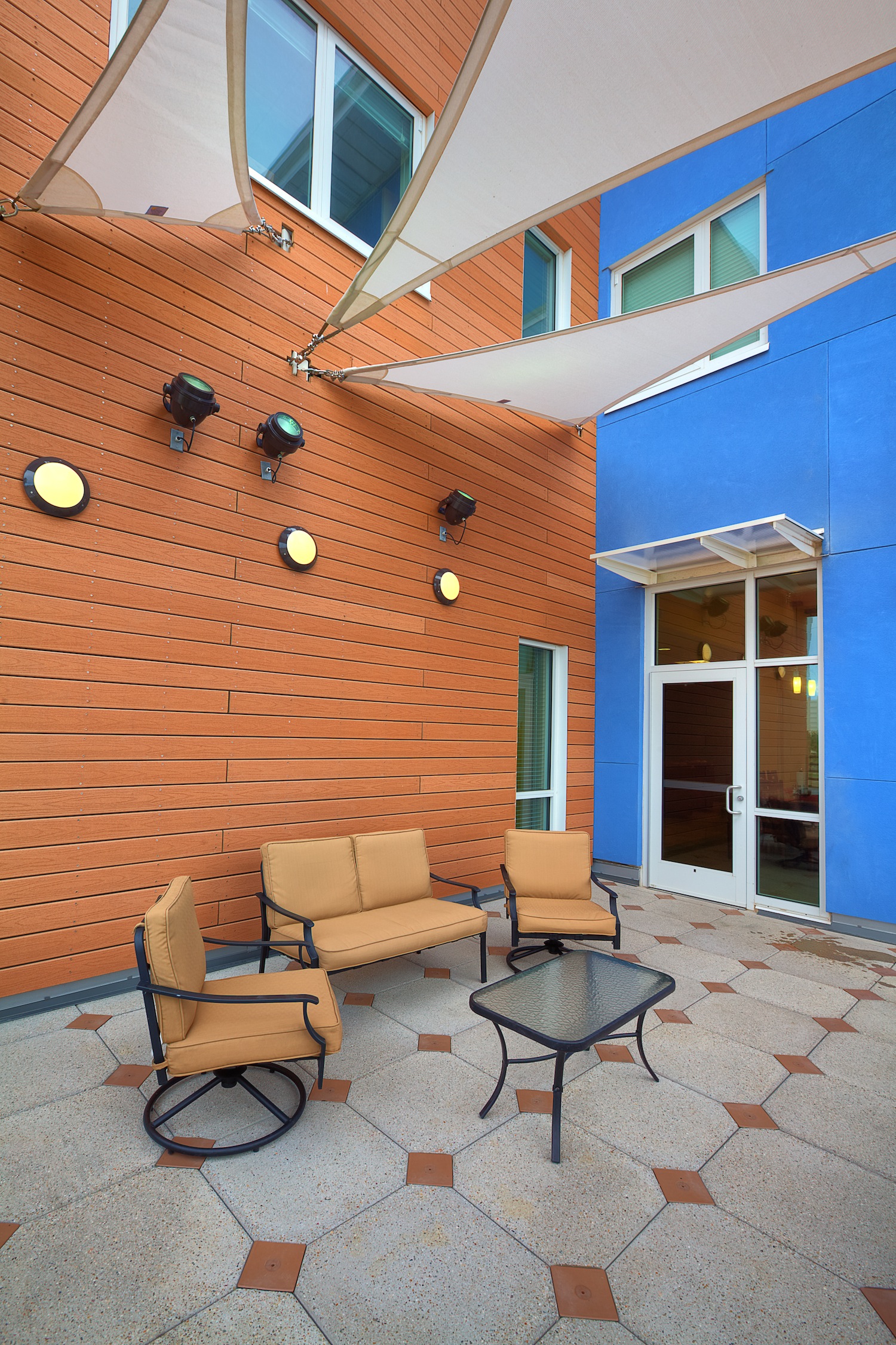 The siding is a major visual feature of the building and is installed in a rainscreen application, that equalizes air pressure and obstructs driving rain during a storm. The material is actually the same composite board commonly used on outdoor decks, and was chosen for its superior durability and impact resistance. All of the exterior glass on the building is impact-rated, which eliminates the hassle of boarding up windows or installing metal shutters. The impact resistant materials allow for larger expanses of glass that open up the exterior and create a welcoming feel for visitors.

In addition to wind and impact resistance, flooding due to storm surges was a major concern that shaped the form of the building. Due to high property values in the area, going vertical with a three story building makes the most of this small site. It also allows for the critical elements of the building, such as the Emergency Operations Center, to be placed high above sea level and remain in operation during a flood event. The first floor is specifically designed to be able to flood without sustaining any significant damage. All of the first floor finishes are durable and moisture resistant, including concrete masonry walls and polished concrete floors. In addition to the electrical outlets being raised forty-eight inches above the floor level, the first floor is on a separate electrical system so that the upper floors can remain operational if it is compromised. The upper floors extend just slightly over the first floor footprint, maximizing square footage but also giving the building a casual feel evocative of an “un-tucked shirt.”  All three floors are tied together by the bright blue stairs and elevator tower.  It rises four stories to keep the elevator equipment off the ground level, provide convenient roof access, and of course, offer spectacular views of the island. Reminiscent of the hose drying towers in fire stations of old, it addresses nearby Padre Blvd. and calls attention to this new public facility. 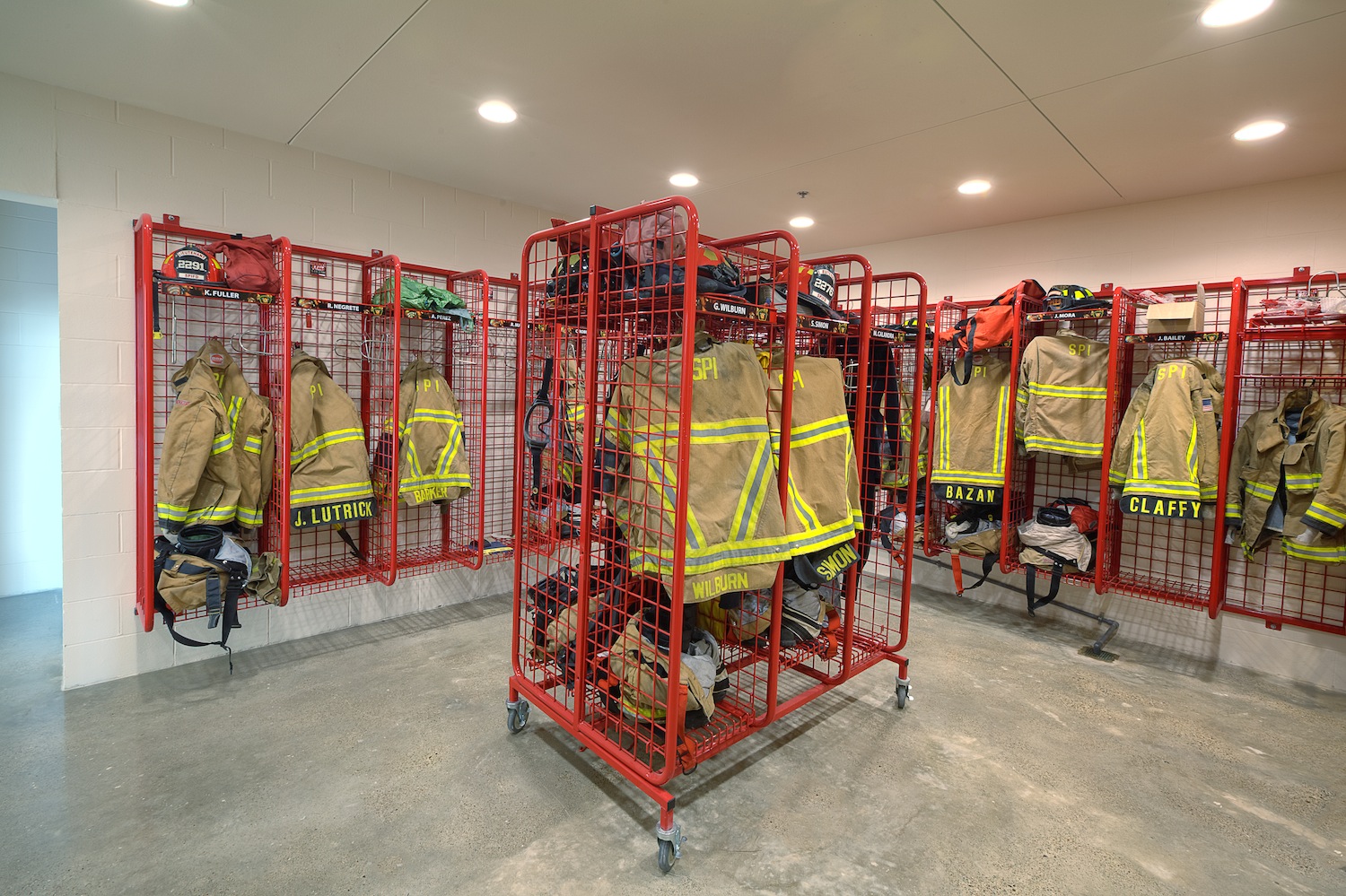 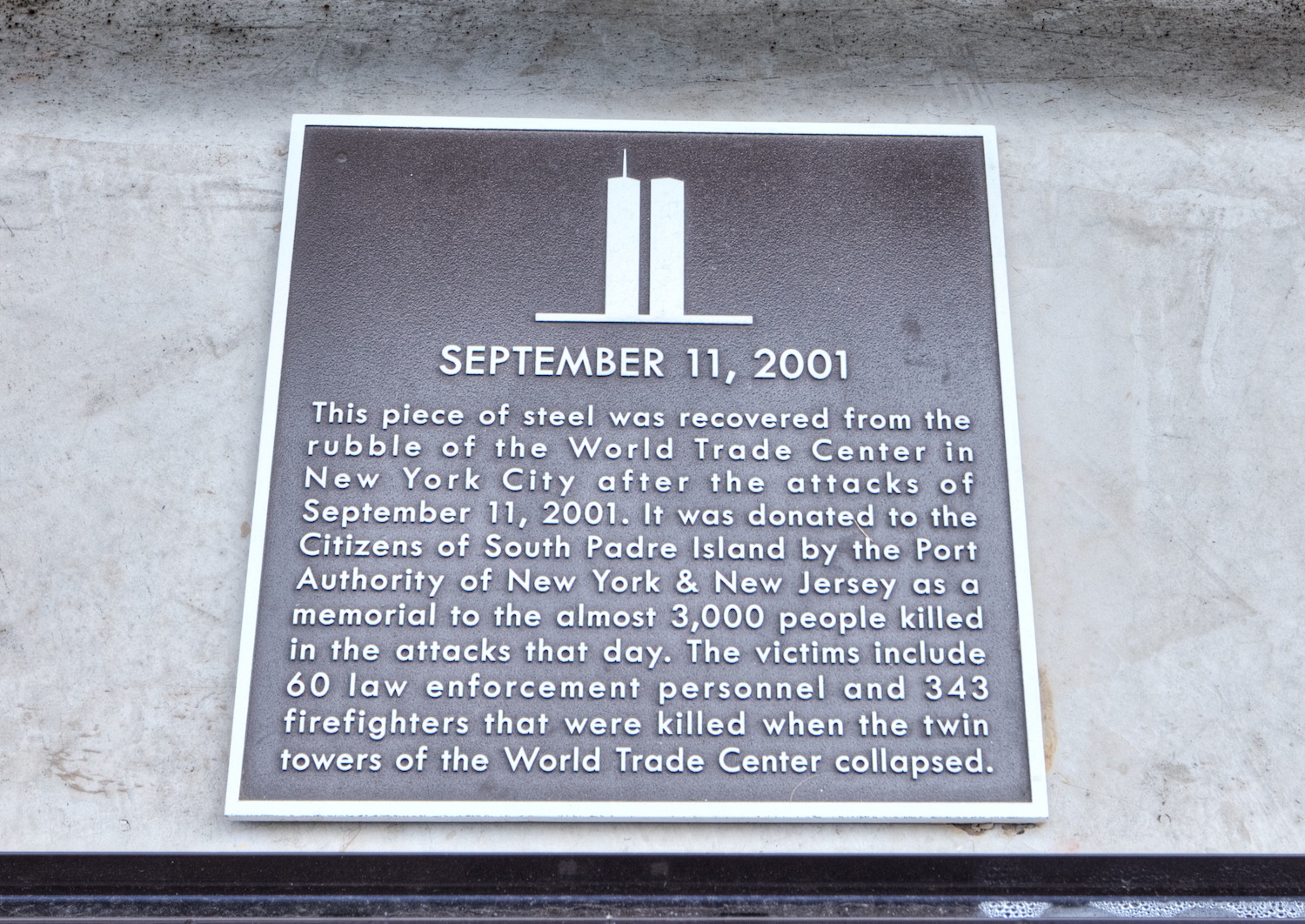 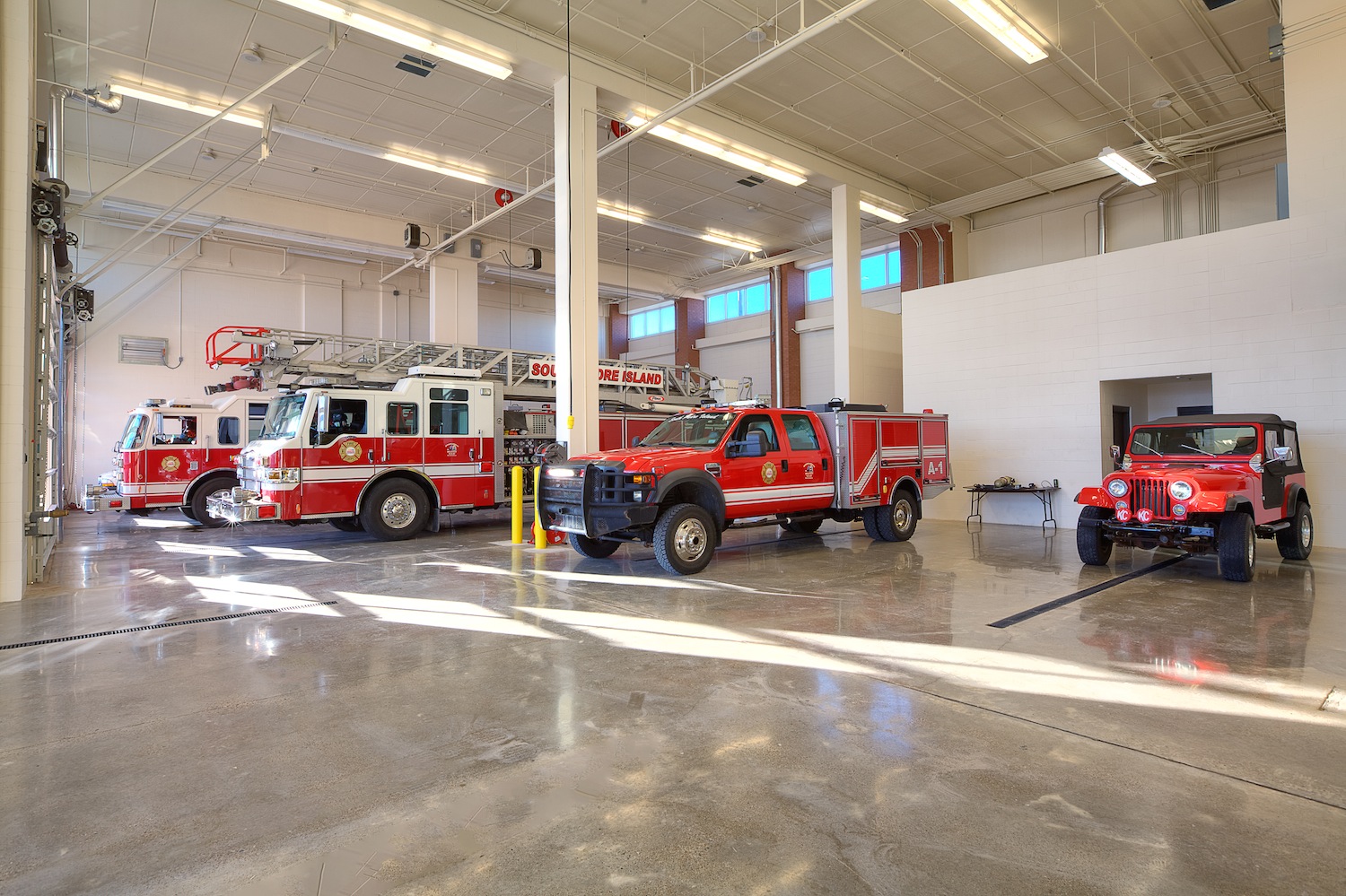 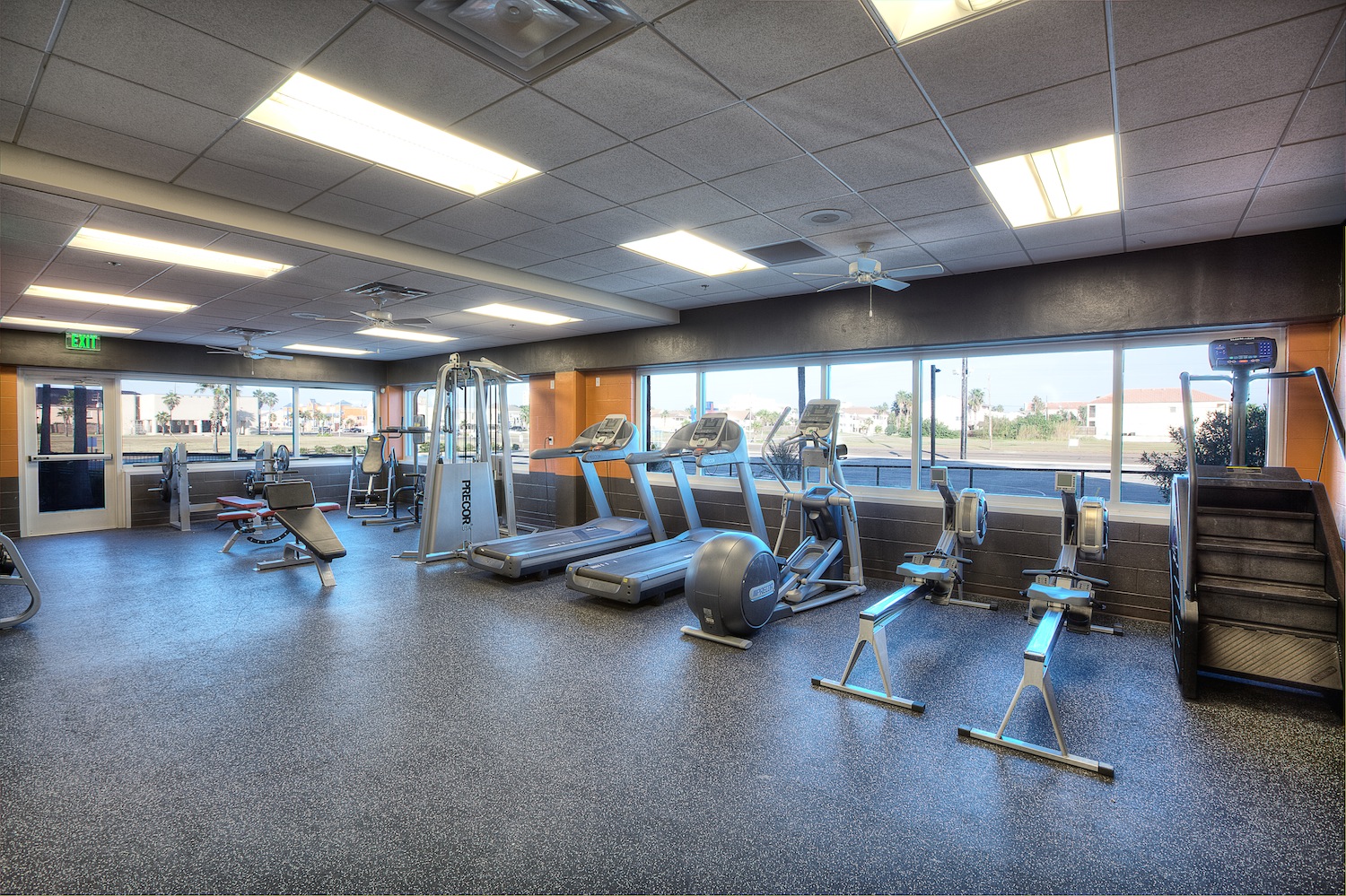 Even in non-hurricane conditions, South Padre Island is a harsh environment for buildings. Many building materials do not last long in the humid and salty air. Therefore, every effort was made to specify materials that are most suited to resisting the elements. The masonry, stucco and composite siding make up the bulk of the building’s response, but the details are just as important, in this type of facility, because it must serve the public in emergency situations for years to come. Fiber-reinforced plastic doors and frames are used in lieu of the standard hollow metal. Stainless steel fasteners are used to attach the rainscreen siding to the building. Window frames and other exterior metals are powder coated. Even the rooftop air conditioning units have special corrosion-resistant coils. Throughout the design of the building, the functional requirements of both the environment and the fire department were met in such a way as to enhance the aesthetics and visual appeal of the building, contributing to an enjoyable experience for both firefighters and visitors.

In the spacious lobby, the fire department’s logo has been custom made out of acrylic, and there is bold wayfinding lettering attached to the wall. A public restroom and small treatment room are available for walk-in emergencies. The watch office is centrally located, allowing firefighters to monitor activities both inside and outside the station. Locker rooms and a large exercise room serve both the fire department and other city employees. The walls of the weight room are lined with windows and mirrors, flooding the space with natural light and providing views out to Padre Blvd as well as into the truck bays. The bulk of the first floor is taken up by the five 65 foot truck bays and associated support spaces, such as a workshop, breathing apparatus room, EMS decontamination/storage, and bunker gear storage. These utilitarian spaces, that would be less affected by flood damage, are appropriately placed on the ground level in close proximity to the truck bays.

The second floor contains the firefighter living quarters.  This area is out of danger of flooding, yet as close as possible to the truck bays for quick response times. The back staircase leads directly into the bays, while a traditional fireman’s pole provides even quicker access from the day room. Ten sleeping rooms line the perimeter of the second floor, each with a window for natural light and emergency egress. Toward the interior, are individual private bathrooms and a large open kitchen, dining area and day room. The dining area opens up to a shaded outdoor balcony overlooking Padre Blvd. to the east. Details and finishes throughout the upper floors are clean and contemporary, with accents of vibrant color to enhance the cheerful island character of this station.

The third floor houses the fire department’s administration personnel, beginning with a reception desk off the elevator lobby, followed by offices for the fire chief, assistant chief, and fire marshal. One of the perks of being the chief is a corner office with views that would make anyone jealous. Centrally located on the third floor is the Emergency Operations Center, which becomes command central in the event of a disaster situation. Outfitted with a projection screen and several flat screen monitors, it seats thirty-five and doubles as a training room for the fire department. It opens out to another balcony facing south, perfect for watching fireworks on a breezy summer night.

On September 11, 2012, the new fire station was dedicated in a bittersweet ceremony honoring the firefighters and many other fallen heroes involved in the World Trade Center attacks of 2001. An eight foot long, 1,750 lb. section of steel beam salvaged from the rubble was donated to the South Padre Island Fire Department and now stands on permanent display in the public plaza in front of the fire station. It is a constant reminder of the tireless service that our firefighting men and women across the country provide, day in and day out, risking their lives for our safety. Providing them with top-notch facilities such as this, which allow them to carry out their mission and serve us better, is the least we can do in return.

Brown Reynolds Watford Architects is a recognized leader in the design of municipal and governmental facilities throughout the state of Texas, with a reputation for exceptional service to our clients. BRW worked closely with Chief Burney Baskett throughout the design and construction process to ensure the success of this outstanding project.

The Art of Communication 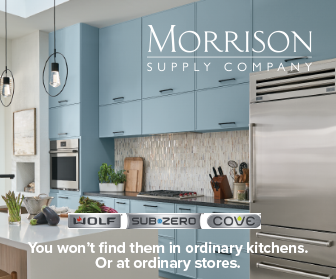